Summary of the Court of Appeal's judgment delivered on 18 December 2018.

The Court of Appeal (The Chief Justice, Justice Whelan and Justice McLeish) has refused to grant Telstra leave to appeal a decision of a trial judge that the respondent , Optus, did not breach section 18 of the Australian Consumer Law by publishing the advertisement depicted below. 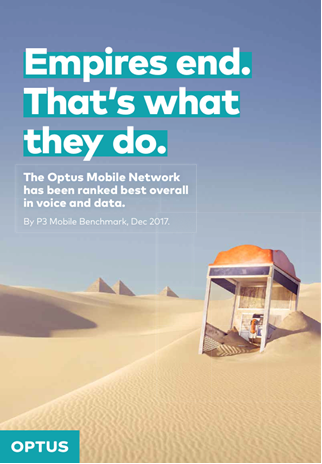 Telstra submitted that Optus’s advertisement conveyed the representation to current or potential mobile customers that there had been a significant and permanent change in the relationship between Telstra and Optus and that Optus was now undisputedly operating a better mobile network overall than Telstra.  This representation was said to be false, misleading or deceptive or likely to mislead or deceive contrary to the Australian Consumer Law.

The trial judge found that the representation Telstra alleged would not be conveyed to a reasonable member of the relevant class of consumers, and he accordingly did not need to decide whether the representation was false or misleading or deceptive or likely to mislead or deceive.