The Supreme Court hears among the most serious criminal, and complex civil, cases in the state, as well as some appeals from Victorian courts and tribunals. As the Supreme Court is the highest court in Victoria only the High Court of Australia can review its decisions.

The Supreme Court has two divisions ' the Trial Division and the Court of Appeal . For a current list of our judiciary see our Judicial Organisational Chart.

The Trial Division is made up of three divisions: The Criminal Division, The Common Law Division and the Commercial Court. It hears among the most serious criminal and civil cases in Victoria, including:

Criminal cases are initiated in the Trial Division by the State of Victoria ' through the Director of Public Prosecutions (DPP) - on behalf of the community.

In the Supreme Court, all criminal cases are heard before a judge and jury. The jury decides the verdict based on the evidence presented in Court and the judge imposes the appropriate penalty for those found guilty.

In civil cases, generally one party (an individual or organisation) takes action against another who they believe has infringed their legal rights.

Some civil cases are also heard before a Judge and jury. Generally in these cases, the jury decides if the plaintiff has established its claim and determines the amount of money (damages) to be awarded.

In civil cases heard without a jury, the Judge decides if the plaintiff has established its claim and gives judgment .

The Court of Appeal determines whether a trial was conducted fairly, and whether the law was correctly applied.

It hears criminal or civil cases decided in the County Court or Supreme Court Trial Division, and some appeals from the Victorian Civil and Administrative Tribunal. Some appeals require permission from the Court of Appeal before they can be heard.

Usually three judges will hear an appeal . Upon deciding a case, the Court of Appeal may:

In addition to Supreme Court judges in the Trial Division, the Court has associates judges who perform a range of functions including mediations and pre-trial case management. Judges of appeal hear cases in the Court of Appeal.

Because the Supreme Court is the highest court in Victoria, only the High Court of Australia can review its decisions. 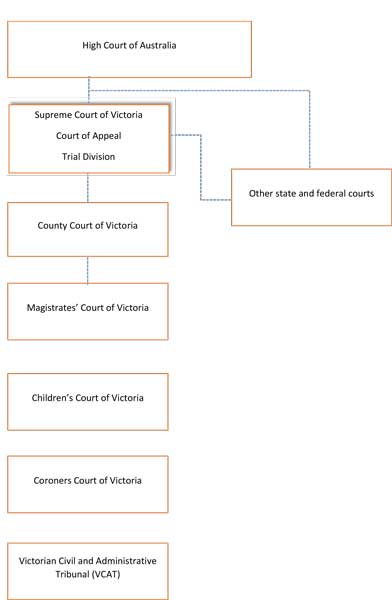 A 'Court for all Victorians' ' regional hearings

Administration and registry functions support the work of the Court and the judiciary.

It is possible to sit in on and observe most cases heard by the Supreme Court. Visit the attending court page for more information.

For current information on cases before the Court, see the Daily List.

The Supreme Court of Victoria: The highest court in Victoria brochure is available to download.