Judging for the People

A special landmark publication celebrating the 175th anniversary of the Court, 'Judging for the People: A social history of the Supreme Court of Victoria 1841-2016', was launched in April 2016.

Commissioned by Chief Justice Warren, the book was produced as a collaboration between the Supreme Court of Victoria and the Royal Historical Society of Victoria. Accomplished scholars, historians and members of the Victorian Bar are some of the many contributing authors in the book.

Copies of the book can be ordered from the Supreme Court Library, please phone 03 9603 6282 for more information.

April 2016 was a special month in our history, as it marked the 175th anniversary of the arrival of Judge John Walpole Willis as its first resident Supreme Court judge in 1841.

Judge Willis took his place on the Bench in a cottage located in King Street on 12 April 1841. He quickly got to work hearing commercial cases, equity matters and serious criminal matters.

Among the first cases he heard in Victoria was the resolution of John Batman's Will.

Following disputes about his authority in 1843, Judge Willis left the colony where he was followed in quick succession by Judges Thierry and Jeffcott, until William a'Beckett, a barrister of the Sydney Bar, came south in 1845.

To mark this occasion the Court organised a range of activities throughout 2016 aimed at highlighting our rich history and heritage.

A special 175 exhibition showcased a range of artefacts spanning the entire history of the Court, highlighting some of its most significant cases and characters. The exhibition, held in the Supreme Court Library, was open to the public until the end of July 2016.

Since April 2016, the Supreme Court building has been lit after dark. Upon its completion in 1884, the magnificent building was a focal point in the city of Melbourne. More than 100 years on, it is dwarfed by surrounding skyscrapers. The grand heritage-listed Trial Division building is once again a draw card with its bright and magnificent hues at night. A fitting tribute to the Court's contribution to the rule of law and the state of Victoria in its 175 year history. 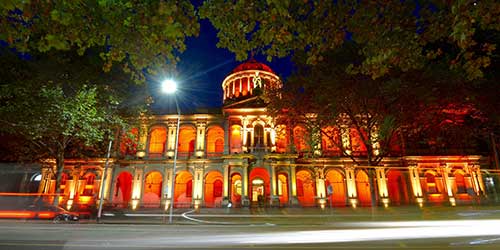 ABOVE: The Court alight in bright and magnificent hues. 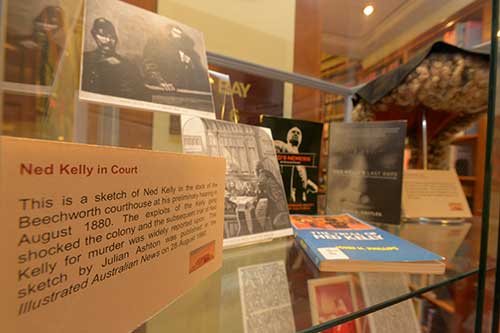 ABOVE: A special 175 exhibition showcased a range of artefacts spanning the entire history of the Court.